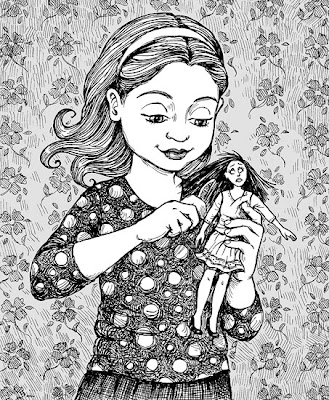 This was really fun to draw.  It's a little shout-out to all the fashion dolls I tortured while growing up.  I sure did love styling their hair!
Posted by Laurie A. Conley at 1:55 PM 14 comments:

I've been wanting to explore where my illustration style can go.....sort of what it might do if nobody was looking.  Tonight I just doodled with what turned out to be a really good tool:  ballpoint pen!  It doesn't smudge (much), it doesn't bleed through the paper or make blots, and most importantly I can't erase it!  I just have to draw whatever and then there it is, blemishes and all.  This was fun;  it felt great to just doodle from my imagination.  I can't wait to keep going! 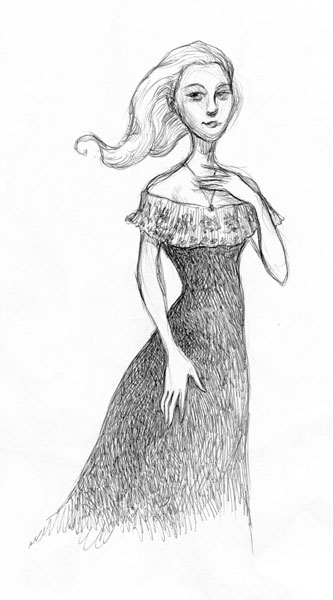 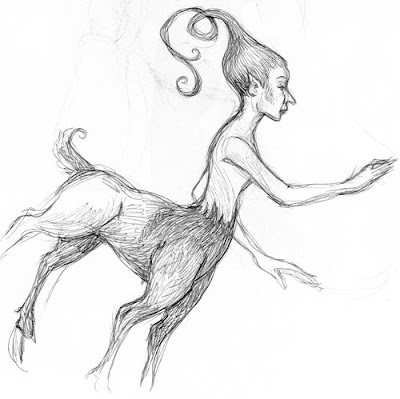 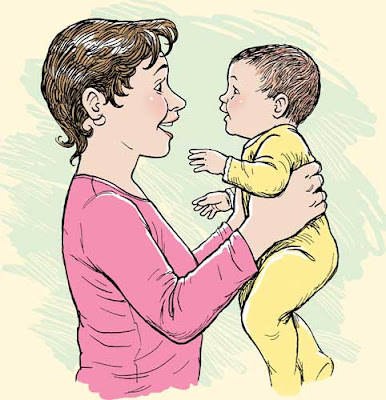 Breaking up is hard to do...

Have you ever had an idea that you thought was good, and you were so sure it was good that you worked way too hard and long trying to get it right when you really just needed to let it go?  It happens to me a lot, actually.  A case in point is my first idea for last week's Illustration Friday topic, "stir".  The first thing I thought of was a witch's cauldron.  But, not being in the mood to draw witches, I thought I'd try drawing a cat instead. 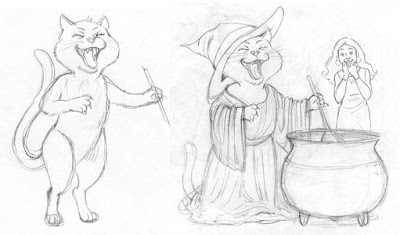 I really liked her face but the plain cat just looked too.....naked.  So then I thought maybe the cat had somehow grown large enough to pilfer the witch's robe and cauldron for dress-up.  But although that idea was clear to me (since I thought of it), I didn't think it would be clear in the illustration.  How did the cat get that big?  Why wasn't there a fire under the cauldron?  The illustration wasn't answering the questions it was creating.
Well, what if there were a fire under the cauldron and the cat had on her own robes?  I tried that. 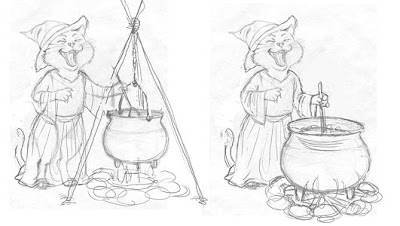 Not bad I suppose, but the cat was becoming less important as the cauldron got more attention and the whole illustration seemed to be traveling farther away from the theme of "stir" than I wanted it to.  At that point I should have known that the idea just wasn't right and stopped working on it.  But no!  First, maybe color would save it! 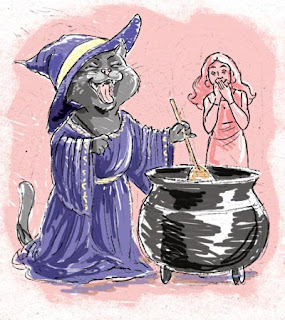 It was the same confusing illustration as before, but with color.  Cute maybe, and I'll keep the cat around to use for something else someday, but it still wasn't right.  After a couple of days of struggling with the cat idea I sadly admitted it just wasn't going to work.
So I started over, ended up with the spoon idea posted on this blog, and had it finished in a few hours.  One more lesson in not falling too much in love with my own ideas.  Sometimes a clean slate is just what is needed.
Posted by Laurie A. Conley at 3:02 PM 2 comments: 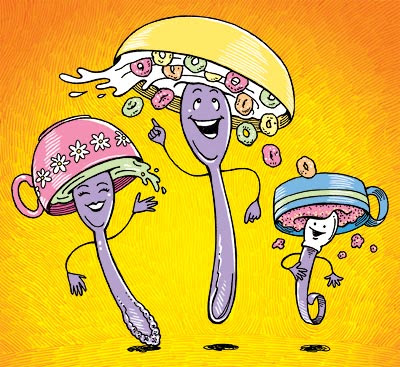 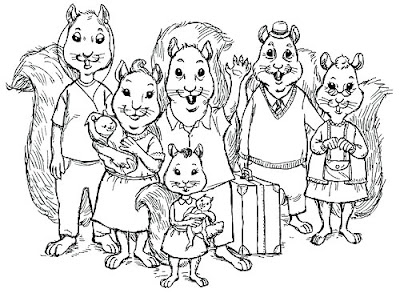 We've lived in our house for 15 years and never had any animal invasions except little field mice.  Until this week.  In the span of a week we had a squirrel in the chimney, and now one (or more) in the attic.  So I'm feeling a little swarmed.....by squirrels!

The idea was to put color into this illustration.  I'll still do that, but I just won't have time this week and I wanted to make sure to post this while "swarm" is still the Illustration Friday topic.  I haven't used colored pencils lately and I think they'll work perfectly to add color to this family.  As soon as it's colored I'll post an updated version.
Posted by Laurie A. Conley at 10:12 AM 8 comments:

Other Places to Find Me 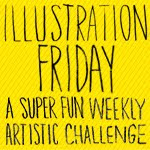